One of the key factors in understanding the emergence of this wine is the phenomenon of the overripening of the grapes on the vine itself. This much less common fact in other latitudes, it has been customary in Alicante due to the kindness of a climate of low rainfall (less than 400mm). The Enfiteusis was a long term lease coming from Roman law that was used in leases of land. It stated that the contract did not end while the lands were in production, once finished the normal harvest the winegrower brought by his austerity, dismissed vineyard workers and proceed to collection of the scattered vineyards of Enfiteusis by the family, they were old and lower in production, causing an overripening on the vine itself that after fermentation resulted in a wine with high natural alcohol,  essential for Fondillón condition.

The "tint alicant" as it was known in England in the Middle Ages was the precedent of Fondillón. In the "Guide du Vin" 1967, the autor Raymond Dumay  tells that at the first wine fair held in Paris in 1214, where they were represented the best wines of the time, the tasting committee chaired  by king Philip Augustus declared as the top five wines to the following: Wine of Cyprus, Málaga, La Malvasia, Alicante and the Goutte d'Or in Paris. That  "tint alicant" was a red wine with structure and high alcohol content, which favored that its consumption might spread in ocean voyages that were widespread in the fifteenth century. The biggest problem with these trips was to prevent water pollution, so mixing it with red alicante, ​ 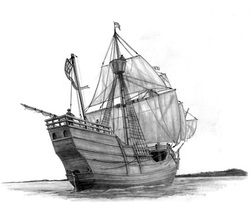 with its alcohol content (up to 18 degrees or more) and tartaric acid, it was obtained a preservative of drinking water. It was also suitable for food due to its content of citric acid and sugar, because as today it was an "avocado" wine.

Published the book voyage of Captain Thomas James in search of the northwest passage in 1633 and in it the following reports: "I never doubted that you may be weak in the Spring and therefore I reserved a cask of wine" Alligant "for that time, putting seven parts of water and one of wine, we did a  soft drink little better than water. Each member of the crew had a pint of "Alligant" per day ".

Another essential factor is the oxidative aging. While other wines cannot bear a few months of sailing, this "tint alicant" aged in the holds of ships sometimes for years, became a much more concentrated wine with a rich bouquet so that soon spread his fame and trade . The sea became his closest ally and led it reached international fame.  ​